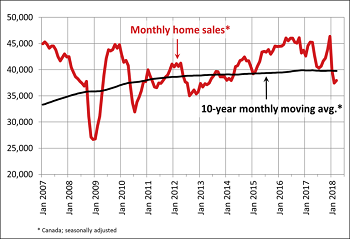 Home sales via Canadian MLS® Systems edged up 1.3 % from February to March 2018. Despite having improved marginally in March, national sales activity in the first quarter slid to the lowest quarterly level since the first quarter of 2014.

March sales were up from the previous month in over half of all local housing markets, led by Ottawa and Montreal. Monthly sales gains were offset by declines in B.C.’s Lower Mainland, the Okanagan Region, Chilliwack, Calgary and Edmonton.

Actual (not seasonally adjusted) activity was down 22.7% from record activity logged for March last year and marked a four-year low for the month. It also stood 7% below the 10-year average for the month. Activity came in below year-ago levels in more than 80% of all local markets, including every major urban centre except Montreal and Ottawa. The vast majority of year-over-year declines were well into double digits.