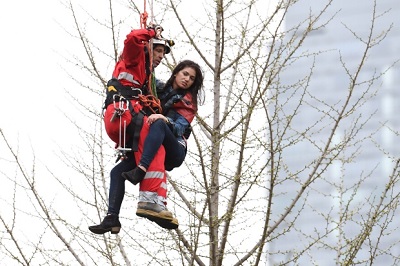 I have a hard time understanding a person’s thought process when they put themselves and others at risk over that potential viral social media “selfie” shot.

I hope the victim surcharge she had to pay included the cost of the emergency responders wasting valuable resources rescuing her from the crane last April.

Please refer to the news item below.

A woman who had to be rescued after scaling a construction crane in Toronto last year has been granted an absolute discharge after pleading guilty to two mischief counts.

Marisa Lazo, 23, who came to be known on social media as “Crane Girl,” was stranded for hours after climbing a crane at a downtown construction site in the middle of the night in April.

It’s believed she went up the crane, crawled out onto the end of it, and slid down a cable to a large pulley device where she got stranded.