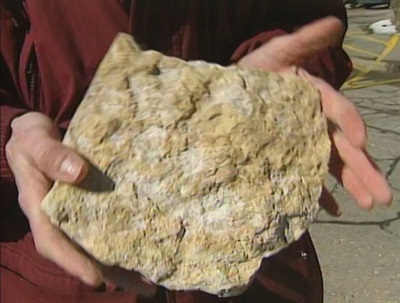 As reported by CBC News, the chunks of fancy stone that had fallen without warning at the Saskatchewan Legislative Building probably gave some provincial officials a sinking feeling.

Perhaps especially when they learned the province had a $20-million repair bill on its hands, which couldn’t be put avoided — in part because the building was both sinking and shifting.

Why? As the CBC’s Eric Sorensen explained to viewers, it appeared the Prairie clay underneath the Legislative Building had been shifting for a while and that wasn’t going to stop without some substantial repairs.

“Just how urgent the problem is became apparent when big chunks of Tyndall stone began to fall off the building recently,” he reported on The National on March 24, 1997.

Sorensen added that “in effect, the wings of the building are moving in opposite directions and the dome is actually corkscrewing up, ever so slowly.”

Structural engineers led journalists on a tour of the building, highlighting problems that had been discovered — including cracks in the building’s exterior, as well as marble inside the legislature.

Hence the need for the costly repairs, which Sorensen reported would involve driving supports down to bedrock located 30 metres below the building. It was believed the work would take four years to complete.

William Brennan, a historian at the University of Regina, said the work would be worth it, despite the cost.

Watch the news video and keep reading on  CBC News