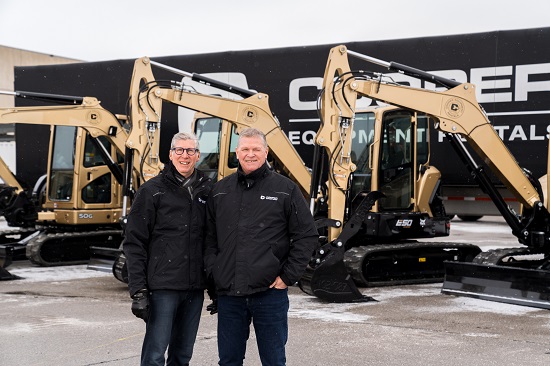 Cooper Equipment Rentals Limited, a full-service construction equipment rental company servicing contractors across Canada, is celebrating its 50th Golden Anniversary by raising money for two worthy organizations — Steps for Life and Movember. Funds will be raised through rentals of 10 pieces of gold equipment that have been added to Cooper’s fleet, including eight gold excavators, one gold trench shield, and one 6-inch pump.

The company will launch a social media campaign featuring the hashtag #spotcoopergold, with a prize sent to anyone who spots one of Cooper’s gold pieces of equipment and posts a photo on social media with the hashtag. Fifty percent of the rental revenue from the gold equipment will be donated to Steps for Life, a fun 5km fundraising walk to help support families affected by workplace tragedy, and Movember, the leading charity changing the face of men’s health, with a total fundraising goal of $100,000. Vendor partners in Cooper’s Golden Anniversary Campaign include Oaken Equipment and Brandt, who have stepped up to invest in painting the four Bobcat E50s and four John Deere 50Gs gold.

“The safety and well-being of our employees and customers is always a top priority at Cooper, so we’re excited about the Golden Equipment Campaign as a fun way for us to help raise much-needed funds and awareness for two charities that are close to our hearts,” said Cooper CEO Doug Dougherty. “We’re grateful to our vendor partners, Oaken Equipment and Brandt, for being supportive and helping us get this campaign launched.”

“This project is a fantastic way to mark Cooper Equipment’s 50th anniversary,” said Brandt CEO Shaun Semple. “Just like Cooper, Brandt has a long-standing commitment to give back to the communities where we do business. We’re proud to help raise funds for these two great causes.”

“We’re proud to have such a longstanding, trusted partnership with Cooper Equipment Rentals,” said Oaken Equipment President Kai Sørensen. “The reason we work so well together is our companies have tightly-aligned core values anchored in honesty, integrity and delivering on what we promise. Cooper continues to move the industry forward as Canada’s preeminent rental company and we’re thrilled to help them celebrate such a significant milestone.”

Cooper’s Golden Anniversary Campaign goes beyond the gold equipment fundraising, also including an initiative with the Canadian Association for Women in Construction (CAWIC). Cooper will provide six bursaries of $1,000 each for Canadian women in each of the provinces it operates, to further their education or receive job skills training in the construction industry. This supports Cooper’s ongoing commitment of encouraging women to join the industry and provide them with equal opportunities within the Cooper family.

“We are lagging behind other industries when it comes to gender parity, but the truth is that businesses perform better when women are involved in leadership positions,” said Dougherty. “I’m hopeful these bursaries will provide six future leaders in our industry with the stepping-stone they need to advance their careers.”

Cooper will also spend the next year celebrating its 50th Anniversary with a monthly social media campaign that will give followers the opportunity to win Cooper swag. A big prize winner will be announced in September 2022, who will be the lucky recipient of four round-trip tickets to anywhere in Canada. In addition, all 55 Cooper branches will celebrate with an Open House on June 15, with customers treated to lunch.

“Fifty years ago, my father started G. Cooper Equipment Rentals out of a job shack in the back of a contractor’s yard. Never in his wildest dreams would he have envisioned this as a nationwide company stretching from the Atlantic to the Pacific coasts,” said Cooper President Darryl Cooper. “This company was founded on the belief that our customers, employees and suppliers are our partners and that the company will only be successful when our partners are successful. These values still ring true today, and are a critical part of the foundation upon which the Cooper Difference is built. I say thank you to all the great employees, loyal customers and suppliers who have supported our journey over the past 50 years.”

Established in 1972, Cooper, a portfolio company of Halifax based SeaFort Capital, is the leading independent Canadian full-service construction equipment rental company, with over 50 branches across Canada servicing contractors in Alberta, British Columbia, Ontario, Quebec and Atlantic Canada. Cooper specializes in the rental of compact construction, aerial, trench safety and pump solutions equipment, while offering a broad range of construction equipment and supplies, backed by unparalleled service and support.