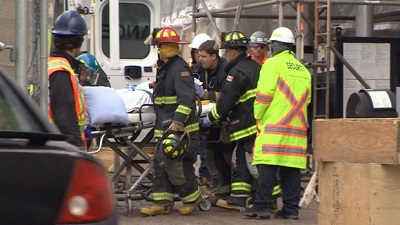 A construction worker in his 30s is in critical condition after suffering a head injury in a fall at the Irving Oil headquarters in uptown Saint John on Monday afternoon.

WorkSafeNB has issued a stop-work order and is investigating.

Details about how the man fell and how far were not immediately available.

Irving Oil did not respond to a request for information.

The worker, who is about 33 years old, “had what appeared to be a head injury, amongst possibly other injuries, but the most severe was a head injury,” he said.

The man was in and out of consciousness at the scene, but was conscious when he was transported to the Saint John Regional Hospital by ambulance, said Caswell.