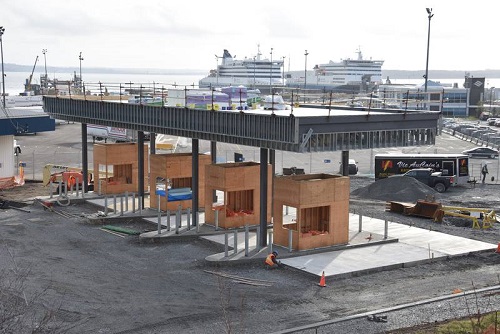 Changes are coming to the Marine Atlantic terminal in North Sydney.

Construction is well underway at the terminal as the company makes enhancements to its marshaling area and ticket booth infrastructure to improve the safety and security of its customers.

The company identified the need for improvements to its marshaling and ticket booth areas after traffic congestion in the previous years.

“We are reconfiguring it so the booths are more modern and offer better amenities to our staff and our customers,” said Darrell Mercer, spokesperson for Marine Atlantic.

“As customers exit the ticket booths right now, there’s a little congestion from commercial and passenger vehicles and they often have to cross paths to move into the actual terminal marshaling yard – with the changes, we won’t have that.”

“Each ticket booth would have a lane that would go into it and it’s more less a feature when you come off the main road then you have an area to go into, with one probably designated as commercial and others would be passenger vehicles,” said Mercer.

Work began at the terminal in September and the company hopes the project will be finished in January.