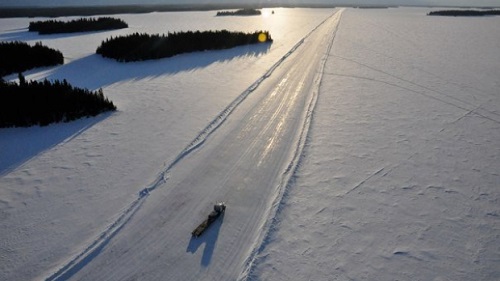 There is still no timeline for when the rail line to Churchill may be fixed, but the construction of a winter road to the northern Manitoba community has begun weeks ahead of schedule.

Specialized machinery has started creating a 275-kilometre temporary road from Gillam to Churchill.

“We are way ahead of schedule now because of conditions. It’s just been cold with … very little snow, so it’s been ideal for packing,” said Mark Kohaykewych, president of Polar Industries, a transportation company that is one of three groups behind the plan.

The initial plan was to start preparing the makeshift ice road around Christmas and hauling supplies by January. But Kohaykewych said they’ve had crews preparing the area for nearly three weeks already and the new goal is to get light loads moving on the road by the end of December.

Spring flooding washed out sections of the railway to Churchill earlier this year, leaving the community of about 750 on the shore of Hudson Bay, 1,000 kilometres north of Winnipeg, without any ground transportation access. In the flooding’s wake, food and gas prices rose and business in the tourism sector dropped.

Last week, Omnitrax, the Denver-based company that owns the rail line, and the federal government fired legal shots at each other.

On Nov. 14, Omnitrax filed a notice of intent to submit a claim under Chapter 11 of the North American Free Trade Agreement, which allows a business to sue a government without first going through the country’s court systems. The federal government filed a lawsuit against the company for breach of contract, demanding $18 million plus interest, later the same day.

Another major player also entered the conversations around the rail line’s future when Toronto-based investment company Fairfax Financial Holdings announced on Thursday it was joining two groups, representing northern communities and First Nations, that have been trying to purchase the Hudson Bay Railway and Port of Churchill from Omnitrax.