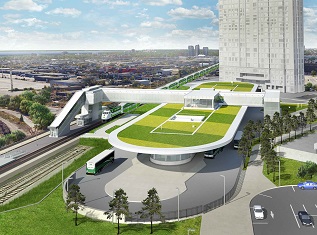 Construction starts on the major transit hub at Kipling Station

Construction has begun on a major transit hub that will boast a significant Mississauga connection.

Mississauga Mayor Bonnie Crombie, along with MPPs and representatives from Metronix and the TTC, appeared at the site of the new bus terminal at Kipling GO Station to break ground on the new transit hub.

The province says the hub will include new and improved pedestrian, bicycle and vehicle connections. They also say it will integrate subway, GO train, and local and regional bus services—including GO, TTC, and MiWay services—into a single mobility hub in Toronto’s west end.

As for what it will look like, the province says the scope of work at Kipling includes an elevated pedestrian bridge; a pedestrian underground tunnel; a new entrance; renovations to the existing Kipling GO station building and existing TTC pedestrian pick-up and drop off building; a new bus terminal building for MiWay and GO Transit; complete site infrastructure including parking upgrades, and improved vehicular, bicycle and pedestrian access; and a new extension of Acorn Ave south of Dundas St. West with vehicular, bicycle and pedestrian access, including traffic signals.

“I’m pleased that shovels are in the ground and work is underway to build the new Kipling Transit Hub. This transformation will make connecting to MiWay, GO Transit and TTC seamless for the thousands of Mississauga residents who travel across the GTHA every day,” says Crombie.

“I’m pleased that the province shares Mississauga’s vision to build a regionally connected transit system that is affordable, fast and easy to use.”

The announcement follows closely on the heels of news that transit could become significantly more affordable.

Prior to beginning construction on the hub, the province said it would be introducing more integration between transit fares.