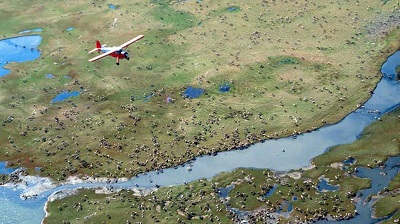 The Trump administration said Thursday it would spend $4 million on construction projects in the Arctic National Wildlife Refuge in preparation for oil drilling in the nation’s biggest wildlife park.

In an announcement that touted planned improvements to U.S. Fish and Wildlife Service visitor facilities, the Department of the Interior said it has approved spending on projects for “Oil Exploration Readiness” in the coastal plain of the Arctic refuge.

The Trump administration is pushing for an oil lease sale in the refuge as early as next year. The tax-overhaul bill passed by the U.S. Congress last December includes a provision mandating two oil lease sales, each offering at least 400,000 acres (161,874.26 hectares), within seven years.

The 19-million-acre (7.7 million-hectare) Arctic refuge, the largest in the U.S. national wildlife refuge system, contains some of the wildest territory in North America. There are no roads, established trails or buildings within the refuge border, and no cell phone service, according to the Fish and Wildlife Service.

“This is a true wilderness refuge,” the Arctic refuge website advises.

Political and business leaders in oil-dependent Alaska have tried for decades to pry open the refuge’s coastal plain, which is believed to hold potential for billions of barrels of oil.

But the plain, between the mountains of the Brooks Range and the Arctic Ocean, is prized for its importance to caribou, polar bears and other wildlife. Oil development there had been banned until Alaska Senator Lisa Murkowski led a move to insert a pro-drilling provision into the 2017 tax bill signed by President Donald Trump.