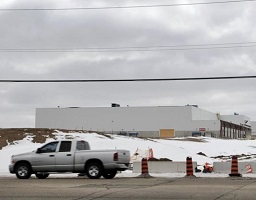 With most of the preparatory work complete, the sprawling site that once housed one of Kitchener’s largest factories could see new construction start later this summer.

Gary Ball, a partner in the project to transform the former Kitchener Frame property at Homer Watson Boulevard and Bleams Road into a mix of industrial, commercial and retail space, said he hopes to break ground in August or September.

The first phase will likely be a medical/professional/commercial complex that would sit on about 1.5 hectares (3.8 acres) of land. That could take shape as a single building of about 60,000 square feet or two smaller buildings at about 30,000 square feet each.

The developers also are in the process of attracting industrial tenants for the two buildings that weren’t demolished; one is about 50,000 square feet and the other is about 80,000 square feet. “We’re negotiating with some companies to come in to these,” Ball said.

Over the years, the factory was variously known as Budd Canada, ThyssenKrupp Budd Canada and Kitchener Frame. It closed in 2009.

New industrial space is also envisioned. A 20-hectare (50 acre) parcel of the site is expected to remain industrial, with 10 hectares (25 acres) destined for retail.