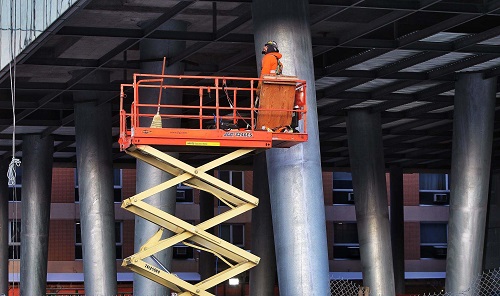 The Winnipeg Regional Health Authority kicked off a tour of its $233-million Women’s Hospital at Health Sciences Centre on Wednesday by announcing that the project has been delayed.

“We are on budget,” he told reporters after delivering the news.

The new facility at the site of the old Weston Bakeries at Elgin Avenue and Sherbrook Street was supposed to open in the fall of 2016, but a series of mishaps delayed construction.

The Women’s Hospital has had to contend with a Sherbrook Street shoring collapse in 2012, a fire at the Diagnostic Centre of Excellence in 2013, and then one of the contractor’s subcontractors — the electrician — went bankrupt.

In short, Glenn McLennan, CEO of Shared Health, said the construction was impacted by other projects and blunders.

“It does get to be pretty complicated at times,” he said.

“We are using the time to make as many changes as we can,” Tjaden said, so “we prepare our staff and that we really work things through so that the transition to a new physical building, which is going to be quite different, is fairly smooth.”

Right now, labour and delivery and neonatal services are scattered across the sprawling HSC campus. If a woman delivers her child at the current Woman’s Hospital but that baby needs intensive care, she has to make a half-kilometre trek to visit her newborn.