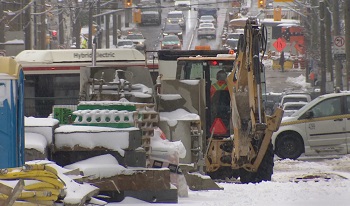 City officials have launched a new pilot project to make the Yonge-Eglinton area “less dangerous” for pedestrians, but residents who work and live near the busy intersection say they remain skeptical.

The project, known as the construction hub co-ordination pilot, began on Monday. There are about 30 condo developments underway in the area, in addition to the Eglinton Crosstown LRT project, according to Coun. Mike Colle, who represents Ward 8, Eglinton-Lawrence.

Dozens of construction sites in a concentrated area have created hazardous conditions for pedestrians.

Colle said the year-long pilot is intended to improve road safety, manage the flow of construction vehicles “in a sensible way,” connect travellers with real-time information, and minimize construction-related disruption. The pilot is set to end in December 2020.

“It’s about some kind of order in a very challenging situation,” Colle said.

“We have more construction here than anywhere else in Canada. We are just trying to make it less dangerous for pedestrians. Traffic management is a huge challenge here because of reduced lanes and because of the volume.

According to the city, Toronto has the largest number of major construction projects underway among the 13 largest cities in North America with 120 cranes at work.

A hub co-ordinator, Stuart McGhie, will initially be located in a small office. He will work with contractors, review construction management plans and collaborate with police. He will also communicate with businesses and residents. Scheduling will be a large part of his job.

“It will be able to ensure that not all of the heavy construction, cement trucks, dump trucks, are in one area on a specific day on a specific week,” Colle said.

“It will basically ensure their coordination doesn’t just go off the rails here. It’s coordinated and it’s also put in a calendar, so they don’t all do the same thing at once and they don’t go on the same street at once.”

The projects have brought a high volume of construction vehicles and heavy machinery to the area every day.