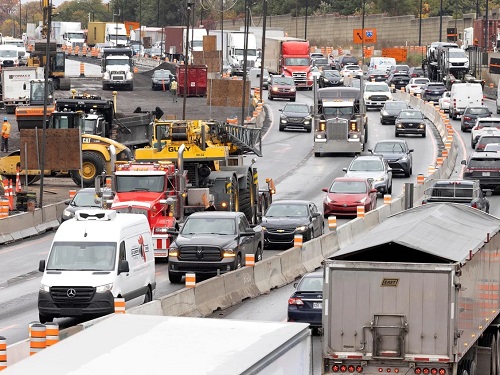 Montreal must radically improve the planning and co-ordination of downtown construction sites through such steps as curbs on business-hour truck deliveries and incentives to limit how much public space builders occupy, a new report says.

The document, released Thursday, includes 10 practical solutions that aim to ease gridlock and inject new life into the central business district. Produced by the Chamber of Commerce of Metropolitan Montreal and the IdéesFX consulting firm, it calls on builders, public utilities and the provincial government to work more closely with the city by setting up a central project registry to minimize disruptions associated with roadwork and make downtown more accessible.

Although it’s responsible for issuing work permits, Montreal only controls 30 per cent of construction sites on its territory, the report says. Most projects are carried out or overseen by Quebec’s Transport Ministry, property developers or utilities such as Bell Canada, Énergir and Hydro-Québec.

“We have to stop thinking that it’s always the city’s fault,” Chamber of Commerce president Michel Leblanc said in an interview. “It’s true that the city does issue permits, which gives it a tool to better control roadwork, but the reality is that there are a number of actions attributable to construction companies, public utilities or the Quebec government. We can act, but this is going to require a change of culture and all stakeholders will need to play a part. If we think that the city can solve the problem on its own, it won’t happen.”