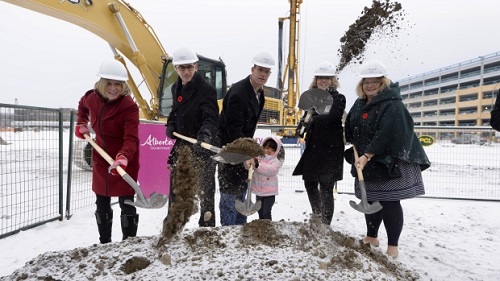 Will Morlidge wishes his wife had lived to see the groundbreaking of the new Calgary Cancer Centre.

Morlidge and his four-year-old daughter, Virginia, were on hand Friday for the groundbreaking of the $1.4-billion facility to be built on the Foothills Hospital site.

“I’m standing in today for my wife Rebecca,” Morlidge said. “I had the honour of being Rebecca’s husband for just over 10 years, and, sadly, Rebecca was overcome by a reoccurrence of her cancer this last August. She lost the battle.”

​The new facility is being built at the northeast corner of the Foothills hospital campus in northwest Calgary.

The NDP government says construction is two months ahead of schedule with an anticipated opening of 2023. It’s expected to have twice as much space available for clinical trials and for patient treatment as the aging Tom Baker centre.

“This is one of the largest construction projects underway in Alberta and will be an economic generator in Calgary and throughout southern Alberta,” Jansen said.

The centre will have 160 inpatient beds, 12 radiation vaults, more than 100 patient exam rooms and more than 100 chemotherapy chairs.

It will span more than one million square feet and include a 1,650-stall underground parking garage.

A 984-foot-long elevated walkway will connect it with other parts of the Foothills campus.

Construction of the centre will create 1,500 jobs in Calgary over the next six years, the province says.