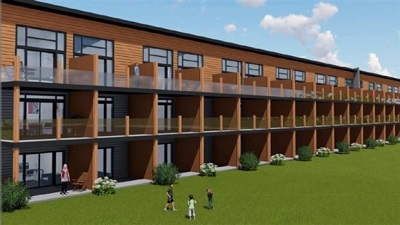 Construction began last month on a controversial $8 million condo project in Shediac Bridge, despite a legal battle between the developers and residents of Indian Point, who say the project violates a decades-old covenant.

Residents are now seeking an injunction to stop the work, and the matter will be heard in Moncton court on Dec. 19.

The project is for a 33-unit, three-storey waterfront condo building bordering Route 134, right before the bridge at the mouth of the Shediac River.

“I just think that it’s arrogant to start a project when there’s legal action,” said Indian Point resident Luc LeBlanc. “It just shows bad faith, on the part of the developer. He has no regard for the court, or for law-abiding citizens.”

The project, Seagull Condo Resort, started making waves last year, after the developer registered an environmental impact assessment in September, which the province then approved in May.

A lawsuit was launched by Marc Girouard, who lives across the street on Indian Point Road.

Girouard’s grandfather used to own the land where the condos are being built. He sold that land in 1964 to the Seagull motel, with a covenant on the deed that no future development would be higher than 3.35 metres.

That clause survived through four land sales but disappeared in 2011, the legality of which is being challenged in court.

“I don’t know how that got away, how they were able to neglect that clause, but they did,” said LeBlanc, explaining that according to the initial contract, only one of the Girourads would have been able to annul the clause.

It was businessman Stephen Gallant who owned the land in 2011. The current developer, Philip Couture of CG Group, bought it from him in 2016, with the covenant already having been removed.

The condo building would be more than  nine metres high.