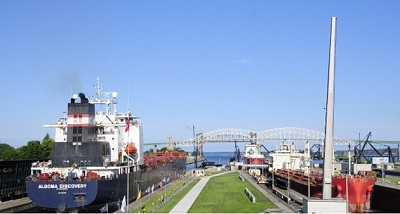 The long overdue construction of a second super lock in Sault Ste. Marie, Mich. has emerged as a U.S. national security issue.

It’s prompted the House of Representatives to direct the U.S. Army Corps of Engineers to accelerate the construction of a second large lock to handle the biggest ships on the Great Lakes, according to a news release from the Lake Carriers Association.

The Committee on Armed Service’s report on the National Defense Authorization Act of 2019 passed the House this week by a vote of 351-66, urging the Corps of Engineers and all involved executive branch to expedite the process toward construction.

The Soo Locks are the only marine connection between Lake Superior and lower Great Lakes.

Only one lock, the 50-year-old Poe, can accommodate the 1,000-foot carriers that transport the majority of coal used in power generation and iron ore used in domestic steel production.

Should the Poe Lock ever be put out of commission, it would have a drastic impact on U.S. manufacturing’s supply chain and would cripple steel production.

In 2017, the Poe handled virtually all of the 39 million tons of iron ore passing through the Soo Locks destined for American steelmakers.

The Lake Carriers Association gave credit to Michigan Congressman Paul Mitchell who’s “been a tireless advocate for a second Poe-sized lock and Great Lakes shipping in general,” according to Jim Weakley, president of the Cleveland-based trade association representing U.S.-flag vessels operators on the lakes.

“Michigan would be the state hardest hit by a lengthy failure of the Poe Lock,” said Weakley.

“A Department of Homeland Security study determined a six-month closure of the Poe Lock would push Michigan’s unemployment rate to nearly 23 percent. Nationwide, 11 million Americans would lose their jobs. We must build a second Poe-sized lock as soon as possible.”

Congress authorized construction of a second Poe-sized lock in 1986, but the project stalled due to an inaccurate Corps estimate of its benefits.