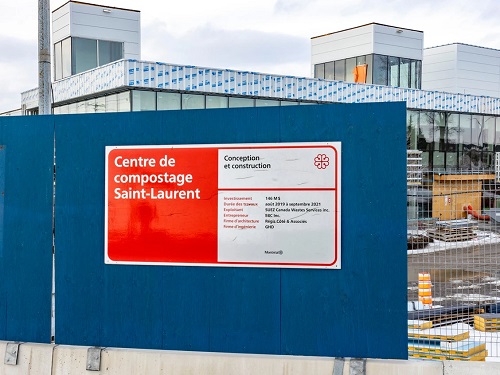 Construction workers abandoned Montreal’s much-delayed and overpriced composting centre in St-Laurent borough and biomethanation plant in Montreal East in July in a dispute between the company that has the municipal contracts to build and operate the facilities and its largest subcontractor, the administration of Mayor Valérie Plante confirmed on Monday.

The city is expecting news this week from the insurance company of the municipal contractor, said Marie-Andrée Mauger, the executive committee member responsible for the file, in response to a question from the opposition at the monthly council meeting.

“The city won’t give a blank cheque to any company for cost overruns if there isn’t a rigorous justification from them,” she said, when questioned by Ensemble Montréal councillor Alan DeSousa about reports that the subcontractor had walked off the construction sites in mid-July, effectively freezing all work, in a dispute over payments by the contractor, Veolia Group.

“Sound management of public funds is our responsibility, and we won’t compromise on it. And we won’t accept to be held hostage by a commercial dispute between the company we gave a contract to and its subcontractors.”