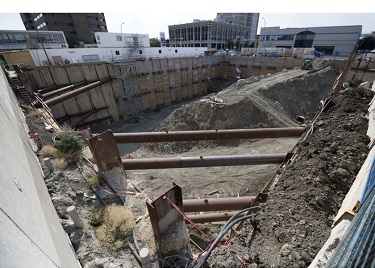 In its bid to fill the hole left by excavation work on the Capital Pointe project, the City of Regina is arguing the site at the corner of Albert Street and Victoria Avenue is a risk to public safety.

Christine Clifford, a lawyer with the City of Regina, revealed that the engineer formerly responsible for the project ordered last week that the site “should be immediately decommissioned” due to unsafe conditions. During arguments before a provincial board Wednesday, Clifford said the site has been neglected too long, is not properly monitored and could present a danger of gas line breaks due to shifting ground.

“The unsafe condition arises from the abandonment of the work,” Clifford said, adding that the excavation pit has also exposed the foundations of nearby properties and could expose them to potential damage if it isn’t filled in by winter.

“Delay in performance of the work increases the risk that an imminent danger will develop on site.”

But a lawyer for Westgate Properties — the company that owns the land intended for the long-delayed condo and hotel tower — said there is no evidence to support the city’s safety claim. Sahil Shoor argued that the order to fill the excavation pit should be stayed while the two sides await an appeal hearing.

“You will search in vain for any evidence from the City of Regina, other than the allegations, that public safety is a concern,” said Shoor, adding that his client would suffer “irreparable harm” if the city moves forward to fill in the pit.

He said developers have already sunk $14 million into the project.

Westgate Properties is challenging an order the City of Regina issued on April 3. The order gave the company until the end of that month to fill the hole left by excavation work at the site. But Westgate appealed it to the Saskatchewan Building and Accessibility Standards Appeal Board on April 17.

A formal hearing is yet to be scheduled. A stay would suspend the backfill order while the two sides go through the appeal process.

Clifford also revealed Wednesday that the engineer of record, Isherwood Geostructural Engineers, left the beleaguered project last week. A number of contractors have also departed. A Leader-Post investigation revealed that contractors have filed liens against the Capital Pointe land due to what one said were unpaid bills.

“We’re scrambling to deal with this,” said another Westgate lawyer, Neil Abbott. He said developers are moving to bring contractors back on board and expect progress by the end of May.

“We are looking for someone in Western Canada that can jump on this fairly quickly.”

The Westgate legal team further argued that the engineer’s recent order is irrelevant, since it followed the city’s April 3 order, which Shoor called “premature.” He also insisted that the city lacked standing to even issue the order in the first place.