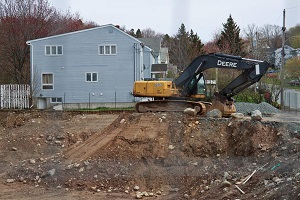 As reported in The Star, there’s nothing the city can do to stop a controversial 16-storey hotel development in Dartmouth.

That’s the finding of a staff report requested by Halifax regional council in a last-ditch effort to see whether the municipality had any recourse to shut down the project at the corner of Prince Albert Rd. and Glenwood Ave.

The area community council approved an eight-storey residential development for the site after a raucous public hearing last September, but the developer, Monaco Investments Partnership, decided to exercise its right to build a 16-storey hotel.

Dartmouth’s land-use bylaws require a long process to approve any residential development larger than three units, but a commercial development like a hotel or office building can proceed as-of-right — meaning no special council approval is required as long as it meets the requirements.

In an interview Tuesday, Dartmouth Councillor Sam Austin referred to the old planning rules as a “ticking time bomb that was set in motion back in 1978.”

The staff report from Steven Higgins, manager of current planning, went to regional council last week as an information report, so it wasn’t up for debate or a vote.

In the staff report, Higgins looked at bylaw requirements, purchase or expropriation and the potential for a “land swap” with the developer, where the municipality would trade land elsewhere for the site on Prince Albert Rd.

The report said purchasing the site would require a “municipal purpose,” in this case “the prevention of a development,” which, it noted, was not a valid reason to spend public money.