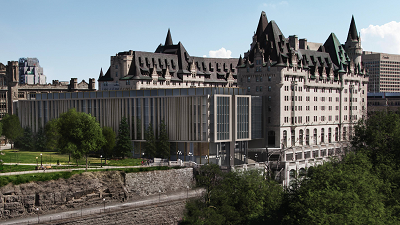 City staff are recommending council approve a proposed addition to the iconic Château Laurier that heritage advocates have denounced.

In a report released late on Monday, city staff said the proposed addition is better than the parking garage it will replace and that the latest version should be supported.

“The addition will re-establish a relationship between the hotel and Major’s Hill Park, and conserve and improve the heritage value of the historic place through the removal of an unsympathetic parking garage addition that diminished the value of the hotel,” reads the report.

Larco Investments, the hotel’s owner, has been trying to redevelop the garage for two years and have publicly revealed three other designs. City staff have not supported previous efforts.

Some of the other versions were taller than the proposed seven stories in the latest design, city staff said the reduced height will ensure the view of the historic hotel is preserved.

“The balance of the composition of the Château Laurier will remain, as the addition is lower than the hotel, and is separated from it, allowing the historic building to remain the dominant physical element on the lot.”

Heritage Ottawa called the proposal “the most disgraceful act of heritage vandalism of our generation,” and the staff report notes that most residents wanted a historical addition to the hotel, not the modern concept the company’s architect has put forward.

“The city cannot require a building to be built in a particular style, or by a particular architect — that is the choice of the applicant.”

Staff said this proposed design won’t crowd out the existing hotel, which keeps the heritage of the old building at the centre.