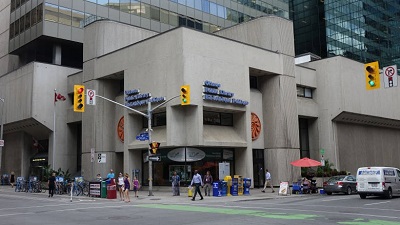 The City of Ottawa wants to sell its old downtown library branch for $20 million to the company that leases the office tower next door.

The city is selling the land in part to help fund construction for the new central library, which is set to be built near Lebreton Flats and open in 2024 at a cost of $174.8 million.

In a report going to council’s finance and economic development committee next week, city staff recommend selling the building to Slate Properties, which owns the attached office building.

Selling the library is complicated by a collection of existing agreements between the city, the Ottawa Public Library Board and Slate Properties.

Slate has a lease for the attached Sir Richard Scott Building that runs to 2034, as well as air rights over the three-storey library building and control over the parking garage under the building.

In the report going to council, city staff wrote that it made sense for Slate to buy the library.

“Slate Properties’ knowledge of the building, together with the associated value uplift for the acquisition of all the property interests, made them the most logical purchaser,” the report reads.

Ordinarily, properties being sold by the city go on the open market, but the report said it would have been difficult in this case.

“Exposing the 120 Metcalfe Street and 191 Laurier Avenue West property to the open market carries risks to the city’s ability to attract a third-party purchaser willing to acquire only partial interests in the property until 2034 and within the timeframe desired by the city and Ottawa Public Library,” the report states.

The $20-million price tag is in line with the appraisal the city received.