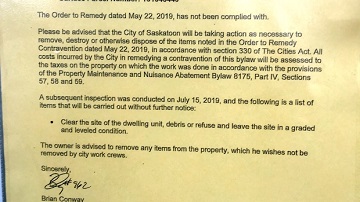 As reported on CTV News, a house in an upscale Saskatoon neighbourhood is about to be demolished. Its owner is nowhere to be found.

Neighbours say the home, located in the 100 block of Beechdale Crescent, has been vacant for several years, with some even pitching in to care for the deserted property.

“All the neighbours here have been pretty much complaining about the house as we’ve all been taking turns cutting grass and trying to maintain it,” said Stacie Dash who lives directly across the street.

While the exact value of the home is difficult to pin down, similar houses in the area currently on the market are listed from $500,000 or more.

But a notice from the Saskatoon Fire Department posted on the home’s front door and addressed to its owner says the uninhabited home could soon be levelled.

The Saskatoon Fire Department began looking in to the Briarwood neighbourhood home earlier this year after residents began complaining about a foul smell coming from the house.

Assistant Chief Wayne Rodger said the department tried unsuccessfully to get in touch with the owner before eventually gaining access to the home, and in the process, finding the odour’s source.

“(We) discovered there had been a significant water leak due to lack of heat over winter months. So this free-flowing water resulted in a large amount of mold growth,” Rodger said.