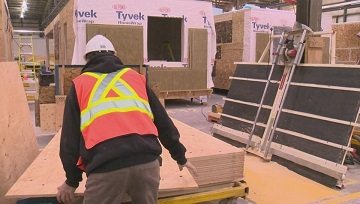 Barry Woods handed out resumes at a city-sanctioned job fair on Tuesday after losing his job in the modular construction industry five days ago.

“I sort of the saw the writing on the wall,” he told Global News at the event.

Woods said he was caught up in the second round of layoffs at Metric Modular’s Penticton, B.C., plant.

The significant job losses at the modular home manufacturer occurred within the past three months, according to Woods, as demand looks to be weakening for pre-fabricated homes.

“They had mentioned that the housing market was taking a dive,” he said.

Global News reached out to Metric Modular on Tuesday, but the company did not make anyone available for an interview.

In November 2017, a press release stated that Lethbridge-based company Triple M Housing expanded its business to B.C., and that the homes would be built in Metric Modular’s Penticton modular construction facility on Government Street, formerly known as Britco Construction.

It said the focus at the Penticton facility was building homes for Triple M Housing.

Moduline Industries in Penticton also faced significant layoffs this year. The business did not return a request for comment.

Meanwhile, the City of Penticton’s economic development department teamed up with WorkBC to host a job fair for the laid-off workers on Tuesday.

Economic development specialist Andrew Kemp said a representative with Metric Modular told him a drop in orders is responsible for the job losses.

Keep reading and watch the news video on Global News