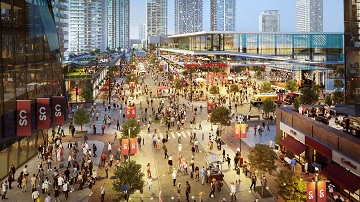 As reported on CBC News, Calgary city council has approved a deal with the owners of the Calgary Flames to help finance what it calls a new event centre in East Victoria Park.

The building will be the new home of the Flames and will act as an anchor for the planned entertainment district bordering the Stampede grounds on the east side of downtown.

“It is a fair deal and it is the right deal, for the right time,” said Colley-Urquhart, who wore a Flames pin on her jacket for the occasion.

The deal was announced last week and Calgarians were only given seven days to provide feedback. Council heard on Tuesday that over 5,200 residents submitted their views.

That said, the deal was a take-or-leave-it proposal.

The Calgary Stampede and the Calgary Sports and Entertainment Corporation already approved the deal based on the understanding it would be dealt with by the city by Tuesday.

“The deal that we have in front of us today … was really done on a commitment to timing,” said Barry Munro, who led negotiations on behalf of the city.

Coun. Jeff Davison, the chair of the event centre assessment committee and a staunch proponent of an arena deal, said engagement would not change the deal.

“Now is not the time to amend a signed multi-party agreement,” he said at the start of Tuesday’s meeting.

Couns. Woolley and Farkas had both asked for more time for feedback, but that was not granted. City manager Glenda Cole told council the timeframe was pushed by all three negotiating partners — the city, the Stampede and CSEC.

“There is no reason to rush the deal. I find it to be a bullying tactic and an unnecessary ultimatum … being critical of one week of engagement doesn’t make me anti-Flames, it doesn’t mean I’m trying to kill this deal. It means I’m trying to do my job,” said Woolley, who voted against the deal.

The approval of the project comes just shortly after council approved $60 million in cuts to the fire department, transit and affordable housing.