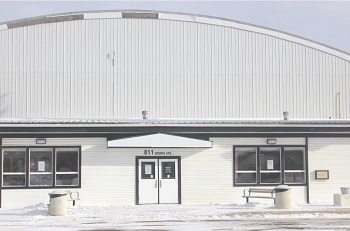 I remember playing many hockey games in this old barn as I grew up in the neighboring city of Weyburn, Saskatchewan. I never did like the smaller ice surface which at the time was the same size as the old Boston Garden.

Time to move forward with progress but thanks for the memories!

The City of Estevan has issued the request for proposals for the demolition of the venerable Civic Auditorium.

The Civic has been closed since last November, and its fate was sealed back in January when the city couldn’t secure a company that would insure the building.

According to the request for proposals (RFP), which is found in last week’s city page, the city is looking for a contractor that can demolish, remove and appropriately dispose of the building and components and materials. The RFP states the Civic is approximately 40,000 square feet.

They would also have to remove all subsurface components, underground water and sewer lines to within one metre west side of the main lobby doors; clay fill material trucked in at the proponent’s expense, as the city will provide the clay material only; and fill material and gravel cap to achieve 95 per cent proctor compaction, to ensure no rutting with heavy equipment upon completion of the final grading.

The target completion date for all of the work is no later than June 15.

Keep reading this article in the Estevan Mercury