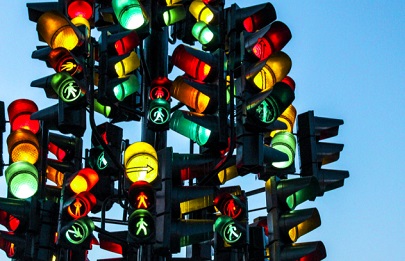 What makes these signals smarter than those traditionally used is their ability to change traffic lights based on what’s going on in real time and will adjust based on traffic flow, bike traffic and pedestrian movement.

“We know that this is just the way of the future,” said Councillor Andrew Knack after the hearing.

“Anytime we’re replacing a traffic signal we’ll build it with the latest and greatest in mind.”

It will begin with pilot projects proposed by city administration in September and the city hopes to start updating the traffic lights with smart technology as they get flagged for updates.

Knack said he didn’t know what the exact cost would be — but estimated it would be lower than $100,000 per upgrade.

“That investment allows us to future-proof our city for emerging technologies, particularly automated vehicles,” he said.

A complete rebuild of a signal would cost around $400,000, they estimated.

Edmonton’s current traffic system is set for a few scenarios like rush hour or light traffic, said Knack. It doesn’t adjust to what’s happening on the ground — unlike smart signals.

Additionally, the smart signals can constantly collect data that’s normally collected once every two to four years, like vehicle counts.

“You can use that data to inform future infrastructure work,” said Knack.

The manufacturers of the technology say they saw a roughly 40-per-cent reduction in vehicle wait and travel times and a 30-per-cent decrease in emissions.

Keep reading in The Star Edmonton