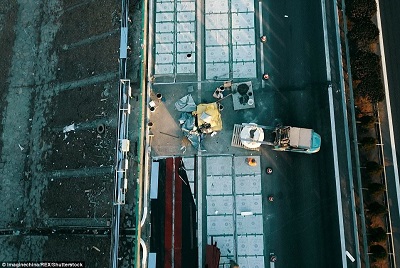 China is building roadways with solar panels underneath that may soon have the ability to charge cars wirelessly and digitally assist automated vehicles. This second solar roadway project – part of the Jinan City Expressway – is a 1.2 mile stretch. The building technique involves transparent concrete over a layer of solar panels.

Construction is complete and grid connection is pending, but is expected to be complete before the end of the year.

The Jinan City solar highway is formed with three layers. The top layer is a transparent concrete that has similar structural properties with standard asphalt. The central layer is the solar panels – which are pointed out as being ‘weight bearing.’ The bottom layer is to separate the solar panels from the damp earth underneath. The road will be durable enough to handle vehicles as large as a medium sized truck.

It was noted by engineers that wireless vehicle charging could soon be integrated and automated car functions could take advantage of the inherent data in this this already wired roadway.

No details were given on which solar panels being used. Two separate sizes could be seen from the images below. It looks like the solar panels are covered with a film to protect them from workers moving over them. Notice in one picture there is an individual sitting down with wires showing between the solar panels connecting them.