TORONTO, May 2, 2018 /CNW/ – Lower sales, higher costs, added stress and even closure are just a few of the devastating consequences road construction wreaks on thousands of small businesses every year.

As many as 65,000 businesses over five years have been affected by road construction projects and often had to borrow, relocate or close down altogether, according to a new report released today by the Canadian Federation of Independent Business (CFIB).

CFIB is calling on municipalities to address the issue now by starting to compensate businesses negatively impacted by infrastructure projects.

“Governments have announced hundreds of billions of dollars of investment in infrastructure projects over the next few years. However, none of this funding has been earmarked to compensate the businesses that will be significantly affected by these projects,” said Simon Gaudreault, CFIB director of economic affairs. “Considering the strong negative impact on some businesses, it would be irresponsible if governments did nothing to help them mitigate the negative consequences or better manage the projects. Countless local jobs, thousands of neighbourhood businesses and the very heart of some commercial streets are at risk if these issues aren’t addressed.”

Huge hidden costs
CFIB’s report, Paving a Smooth Road: Helping small businesses survive infrastructure work, is the first to evaluate the overall impact of road work on Canadian businesses. It found that since 2012, 41 per cent of them have been affected by road construction projects, with five per cent affected in a major way. In the long term, this means that one out of five businesses could suffer from the consequences of poorly planned projects.

Nearly half (46 per cent) of respondents affected by such construction said their sales had declined. Almost one in four (23 per cent) experienced a significant level of stress, and more than one in five (21 per cent) had to draw on personal or business savings. Seven per cent even considered closing or relocating their business.

“These results show that too often local businesses struggle during public infrastructure projects, shouldering unfair economic costs that are being offloaded on them,” added Gaudreault. 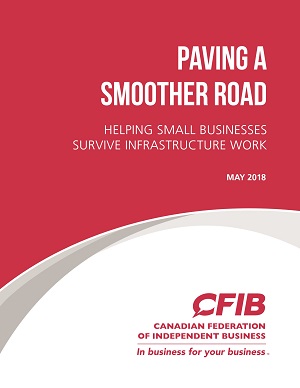 Compensation needed now
Most infrastructure projects are not properly mitigated, leaving businesses to deal with the consequences alone: seven out of 10 businesses are dissatisfied with how governments deal with the negative impacts of these projects.

“With peak road construction season approaching, we are calling on all municipalities to show leadership and be among the first to adopt a policy supporting small businesses threatened by extensive infrastructure projects,” said Gaudreault. “As a first step, they should put in place compensation measures for those businesses impacted by construction in a major way, inspired from the ones already existing in other jurisdictions, like Seattle, Brussels and Sydney.”

“Construction is a serious problem for thousands of local businesses who need to see more action around this file in the next few months. The upcoming Federation of Canadian Municipalities’ annual conference would be a good opportunity to show leadership on this issue,” concluded Gaudreault.

Survey methodology
CFIB conducted its survey between July 6 and 26, 2017 with 5,573 small business owners across Canada. The results are accurate to ± 1.3 percentage points, 19 times out of 20.

About CFIB
CFIB is Canada’s largest association of small and medium-sized businesses with 110,000 members across every sector and region. Learn more at cfib.ca.