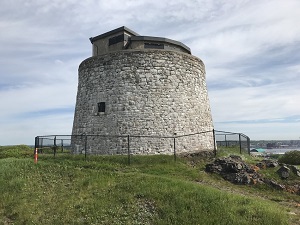 Groupe Atwill-Morin has been awarded a 5 million dollar contract to restore the Carleton Martello Tower that overlooks the harbour in Saint John New Brunswick. Martello towers are small defensive forts that were built across the British Empire during the 19th century. Construction of the tower at Saint John began in 1813, during the War of 1812.

For more than a century, the Carleton Martello played a crucial role in the defence of Saint John and its harbour. It remained in use until 1944 and was declared a National Historic Site in 1948. Sixteen Martello towers were erected on what is now Canadian territory. Nine of them survive to this day; testaments to Canada’s military architectural history and to 130 years of coastal defence technology.

“It is an honour and a privilege for the Atwill-Morin Group to be called upon to restore what has become a cherished symbol of Canadian history; a small circular fort, the origins of which go back to the defence of the south of England during the Napoleonic Wars” says Matthew Atwill-Morin, CEO of Groupe Atwill-Morin.

The restoration work at the Carleton Martello will be meticulous to say the least. Locally sourced stone will be used to repair or to reinforce a plethora of irregular structural shapes and volumes. Situated west of Saint John, in a locale once known as Carleton, the tower houses a gunpowder magazine and barracks for soldiers who once took in a panoramic view of the city, of the bay and of Partridge Island; landmarks that they were sworn to protect from American military forces, who were then at war with Great Britain.

“The tower rises to 9 metres and it has a cannon platform measuring some 15 metres in width at the base. A great deal of expertise and attention to detail will be brought to bear on this project” says Mr. Atwill-Morin. Walls that are nearly 2 metres thick will be rebuilt or reinforced in some sections and all works will be in keeping with the building’s historical significance. In many cases, stones will be removed, numbered, cleaned and replaced in one large masonry jigsaw operation.

Work is due to be completed by December the 24th, 2020 and the Carleton Martello Tower will continue to stand tall as a military museum.