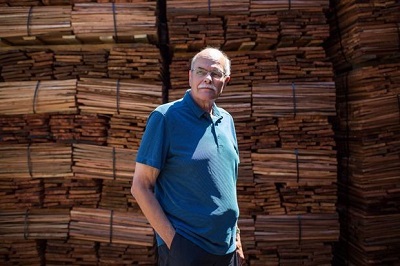 Canadian makers of cedar shakes and shingles scale back production over U.S. tariffs

Canadian makers of cedar shakes and shingles say they have been forced to scale back production or even temporarily shutter mills because of new U.S. tariffs on the wood-roofing materials.

U.S. Customs and Border Protection recently added Canadian shakes and shingles to the type of wood products subject to U.S. tariffs. The duties average 20.23 per cent against most Canadian softwood lumber sent south of the border.

The newly formed Shake and Shingle Alliance is asking the U.S. Department of Commerce to review the scope of products that fall under the softwood file, arguing that cedar shakes and shingles (CSS) should be excluded.

“This scope issue is having an immediate and significant deleterious economic impact on the CSS industry,” the alliance said in documents submitted to the commerce department. “Mills are already curtailing or shutting down production, and sales are being lost.”

Hugh Farris, a sales representative at Best Quality Cedar Products Ltd. in Maple Ridge, B.C., said times have been tough for the company’s mill since the U.S. tariffs on wood-roofing materials took effect on March 15.

The privately owned mill about 50 kilometres east of Vancouver began a four-week shutdown in mid-May. It reopened last week, but the 55 employees are nervously watching the forestry battle, because the mill sells 99 per cent of its output to U.S. customers, Mr. Farris said.

Since the duties kicked in, U.S. demand has fallen sharply. “The market for shakes and shingles has shrunk quite dramatically for us,” he said in an interview. “It almost went dead for a while. We had to shut down for a month because all of a sudden, our product went up more than 20 per cent in price.”

Mr. Farris, an industry veteran, recalls the battle over tariffs the United States imposed on Canadian shakes and shingles three decades ago. He fears the latest dispute will last through the summer and perhaps toward the end of 2018. “We still have a fair whack of inventory here. If we can’t sell enough, we will have to shut down again,” he said.