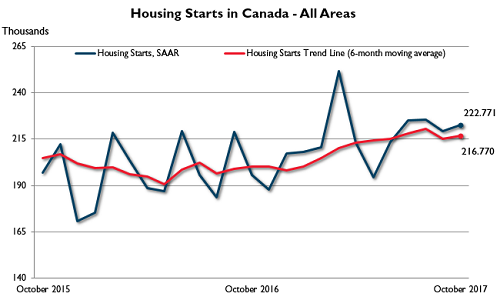 OTTAWA, November 8, 2017 — The trend in housing starts was 216,770 units in October 2017, compared to 215,153 units in September 2017, according to Canada Mortgage and Housing Corporation (CMHC). This trend measure is a six-month moving average of the monthly seasonally adjusted annual rates (SAAR) of housing starts.

”The trend in housing starts essentially held steady in October following a decrease in September,” said Bob Dugan, CMHC’s chief economist. ”Nevertheless, new home construction remains very strong in 2017, as the seasonally adjusted number of starts has been above 200,000 units in nine of ten months so far this year.”

After four years of declining construction activity, population growth has helped push New Brunswick’s housing starts up 28% year-to-date. Starts have been strong across the province, with much of the activity concentrated in the Moncton Census Metropolitan Area (CMA). Multifamily starts have been particularly strong in the hub city, up 49% year-to-date.

In the Montréal area, this past month saw the highest level ever recorded of residential construction for the month of October, with close to 3,500 housing units started—half of them on the Island of Montréal. Once again in 2017, condominium and rental housing construction has driven the growth. The decrease in inventories of completed and unsold condominiums and the low vacancy rates in newer rental buildings seem to have prompted developers to ramp up on construction projects this year.

Low-rise housing starts trended higher in October supported by improved employment and earnings this year. This increase was just enough to offset the effect of the sharp decline in apartment starts this month. To October, housing starts were 27% higher than their level in 2016. The rise in starts so far this year was mostly driven by a doubling in apartment starts following three years of declining high-rise construction in the CMA as the number of completed and unsold condominiums has trended down considerably since peaking in mid-2016.

October housing starts in Thunder Bay trended at their highest level in three years due primarily to a continued increase in the trend for multiples starts. Downsizing senior households, international post-secondary students and in-migrants to the CMA drawn in by an improving service sector have all been supportive of apartment starts this year. Conversely, the trend for single detached starts has remained mostly flat owing to more affordable alternatives in the resale market.

Total housing starts in the CMA trended lower in October 2017, with the most pronounced declines occurring in single-detached home and apartment starts. Lower trending single-detached home starts are reflective of fewer sales of pre-construction units through 2016 and spring of 2017. Sales of pre-construction condominium apartment units have been brisk over the past couple of years and these units continue to start construction with varying levels of intensity each month.

Multi-unit housing starts in the Windsor CMA posted the highest levels for the month of October since 2004, while single-detached starts trended lower for a second consecutive month. Slightly lower demand in the resale market evidenced by a declining sales-to-new listings ratio has discouraged builders from keeping single-detached starts as high as they were early in the summer. Also, Windsor’s growing population of seniors has strengthened demand for multi-unit starts, as seniors have a higher propensity to downsize to apartment units and semi-detached homes as they age.

While labour market conditions and housing demand have improved this year, the trend in total housing starts has been slowing down over the last couple of months. A rise in active listings in the competing resale market combined with elevated inventories in the new home market, especially for apartments, have impacted new home construction. Despite the decline in the trend, total actual housing starts to the end of October were still up 24% compared to the same period a year earlier.

Starts trended higher in the Vancouver CMA in October, with seasonally adjusted monthly starts reaching a 12-month high. The increase was primarily driven by a significant uptick in condominium apartment starts in Burnaby, Coquitlam and Surrey, where the demand is strong for more affordable multi-family dwellings. Year-to-date starts remain below 2016 levels, mostly due to fewer projects getting underway in the City of Vancouver and on the North Shore this year.

Rural starts were estimated at a seasonally adjusted annual rate of 16,836 units.