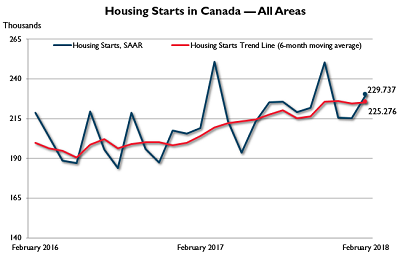 OTTAWA, March 8, 2018 — The trend in housing starts was 225,276 units in February 2018, compared to 224,572 units in January 2018, according to Canada Mortgage and Housing Corporation (CMHC). This trend measure is a six-month moving average of the monthly seasonally adjusted annual rates (SAAR) of housing starts.

February housing starts in the Vancouver census metropolitan area (CMA) continued to build on the increase in construction activity in the previous month, leading to a strong start to the year in 2018. The North Shore, Burnaby,  and the City of Vancouver were the main contributors to the increase with a number of condominium and rental multi-family units getting underway.

The trend measure for housing starts in the Victoria CMA moved upward significantly in February as a result of a large number of multi-unit dwellings getting underway, particularly new apartment rentals and condominiums. Demand for multi-unit housing of all types remains high in the Victoria area as inventories of unsold units and rental vacancies remain low.

Total housing starts in the Calgary CMA trended lower in February 2018, compared to the previous month as the relative pace of starts declined from January. The trend in multiple construction, which was relatively strong in the second half of 2017, has moderated. Elevated apartment inventories continue to slow the pace of construction.

Housing starts continued to moderate in the Winnipeg CMA in February as the trend in total housing starts moved lower. The decline in total housing starts was largely concentrated in the multi-family segment, with rental apartment units posting a considerable decrease compared to last year. Despite strong levels of employment and balanced market conditions, new housing construction has been impacted by an elevated level of production last year.

The pace of single-detached housing starts in February 2018 was the highest over an 11-month period. Conversely, multi-unit housing starts slowed in February following a surge in the second half of 2017. Solid demand for more affordable housing relative to neighbouring Toronto CMA, continues to stimulate new home construction activity in Oshawa.

Housing starts in Toronto CMA trended higher in February on the back of a record number of apartment starts. Elevated prices and affordability concerns in the low-rise market have resulted in significant increases in condominium apartment construction. Low-rise home starts continued to trend lower, as increased supply in the resale market has resulted in less spillover demand for pre-construction units.

The surge in the construction of rental apartment units continues in the Montréal area, with 1,400 units started since the beginning of the year, about three times more than in the same period last year. For now, the focus is almost entirely on conventional rental apartment construction, but in the context of an aging population, several seniors’ residences are expected to be started in the Montréal area by the end of the year.

In February 2018, housing starts continued to trend downward in the Trois-Rivières CMA. With just 13 starts in the first two months of 2018, this was the slowest start to a year since 1999. The high inventory of unabsorbed housing units and low population growth are contributing to reducing the need for new homes on the Trois-Rivières market.

Rural starts were estimated at a seasonally adjusted annual rate of 18,526 units.