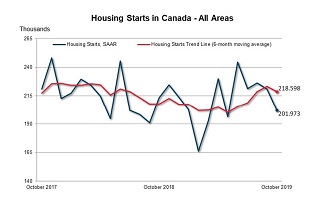 The trend in housing starts was 218,598 units in October 2019, compared to 223,276 units in September 2019, according to Canada Mortgage and Housing Corporation (CMHC). This trend measure is a six-month moving average of the monthly seasonally adjusted annual rates (SAAR) of housing starts.

VancouverHousing starts in Vancouver Census Metropolitan Area (CMA) trended lower in October 2019 compared to October 2018, driven by a 15% decline in the multi-units sector. However, the year-to-date multi-units starts, mostly concentrated in the City of Vancouver and the City of Surrey, was up 31% compared to the same period last year, contributing to an increase of total starts between 2018 and 2019.

KelownaHousing starts in the Kelowna CMA were up significantly in October, relative to the same month last year, as some new large multi-unit projects got underway. In particular, a large number of rental apartment units got underway representing 73% of the overall number of multi-unit starts in the month of October. The number of rental units that have gotten underway in October represents the first meaningful increase in rental housing starts in over a year.

ReginaTotal housing starts in Regina trended higher in October after builders increased the pace of single-detached construction. Despite the increase in the six-month trend, actual residential starts have declined by 57%, year-to-date, from the same period in 2018. The reduction is due to a number of factors including elevated new housing inventory, moderate economic conditions, higher construction costs and weaker new home demand.

Thunder BayThe trend for overall housing starts in the Thunder Bay CMA increased considerably in October due almost entirely to an increase in the trend for apartment starts. Notably, the trend measure for apartment starts reached its highest level in nearly two years due to October rental apartment construction. Supporting this increase has been growth in the population aged 65 and over, the fastest growing segment of the population, and a group with a relatively high propensity to rent.

TorontoTotal housing starts trended slightly lower in October due to lower multi-unit home starts. Strong pre-construction sales of condominium apartments over the past two years continue to break ground at a varying pace throughout this year. Pre-construction sales of single-detached homes trended higher towards the latter half of 2018 and these units have started to break ground over the past several months, thus reflected by their higher trending starts.

HamiltonIn Hamilton CMA, overall housing starts trended up due to greater activity in both single-detached and multi-unit homes. The increase in the latter was mostly the result of a higher number of apartment starts over the past six months. A shift in homeownership demand towards lower priced homes and persistently strong rental demand have both supported the high level of apartment construction in Hamilton.

SherbrookeSince the beginning of the year, residential construction activity has been particularly strong in the Sherbrooke CMA. From January to October 2019, housing starts recorded in the region increased by 44% over the same period last year. The increase in activity comes mainly from the rental segment, with the launch of traditional rental housing projects and residences for seniors. Overall, residential construction in the region continues to be supported by rising full-time employment, migration and an aging population.

Prince Edward Island (PEI)PEI housing starts were 146% higher this October compared to October 2018. This is due to the ongoing surge in new apartment construction activity in response to the Island’s near zero vacancy rate and affordable rental needs. So far this year, starts are 68% higher than 2018. This trend reflects primarily increased capital project spending and solid growth in population, income and employment.

Rural starts were estimated at a seasonally adjusted annual rate of 12,669 units.