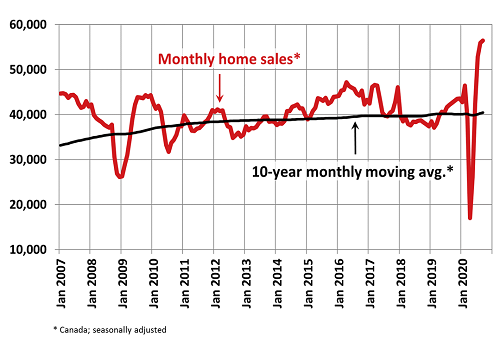 Home sales recorded over Canadian MLS® Systems edged up a further 0.9% between August and September, raising them to yet another new all-time monthly record.

The small change from August to September had under its surface a mixed bag of results with about 60% of local markets seeing gains. Increases in Ottawa, Greater Vancouver, Vancouver Island, Calgary and Hamilton-Burlington sales were mostly offset by declines in the Greater Toronto Area (GTA) and Montreal; although, activity in the two largest Canadian markets is still historically very strong.

“Many Canadian housing markets are continuing to see historically strong levels of activity as we enter into the fall market of this very strange year,” stated Costa Poulopoulos, Chair of CREA. “Along with historic supply shortages in a number of regions, fierce competition among buyers has been putting upward pressure on home prices. Much of that was pent-up demand from the spring that came forward as our economies opened back up over the summer. With second wave worries growing, we will remain vigilant in adhering to government and health officials’ directives to keep our clients safe. Now as always, REALTORS® remain the best source for information and guidance when negotiating the sale or purchase of a home,” continued Poulopoulos.