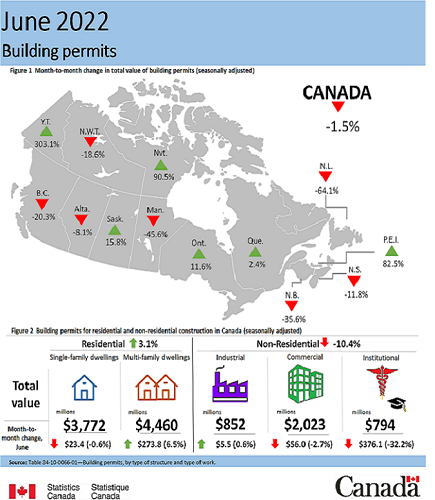 Statistics Canada reports that the total value of building permits in Canada declined 1.5% in June to $11.9 billion, mainly due to the non-residential sector, which dropped 10.4% to $3.7 billion, after posting its second-highest monthly value.

The value of residential permits in June increased 3.1% to $8.2 billion nationally.

The value of multi-family building permits increased 6.5%, with Ontario (+24.8%) leading the way, due to several apartment buildings being built in Mississauga. Overall, 15 out of the 20 highest value permits submitted across all sectors were for apartment or condo buildings.

Construction intentions in the single-family home component declined 0.6% due to large decreases in Manitoba and Newfoundland and Labrador. Gains in Ontario (+2.1%) helped to counter these losses.

Non-residential sector down in June

The total value of non-residential sector permits fell 10.4% to $3.7 billion, largely due to decreases in British Columbia’s commercial and institutional components.

Commercial permit values decreased 2.7%, with declines in eight provinces. In contrast, Ontario saw a notable increase (+37.5%), driven by a permit for a large office building in the city of Toronto.

Construction intentions in the institutional component fell 32.2%, following strong growth in May resulting from a large hospital permit in British Columbia.

Conversely, the value of industrial permits rose 0.6%. Notably, it shot up 206.0% in Saskatchewan, largely due to the construction of a new power plant in Moose Jaw.

In the second quarter of 2022, the total value of building permits increased 2.8% from the previous quarter to $35.9 billion with gains in both the residential and non-residential sectors.

The residential sector increased 7.2% this quarter, with gains in the value of both single- (+5.0%) and multi- (+9.3%) family permits. British Columbia led the growth, followed by Alberta and Ontario.

The number of new residential units rose 6.0%, after a decline of 7.8% the previous quarter. This incline was driven by a rebound in the multi-unit component (+8.9%).