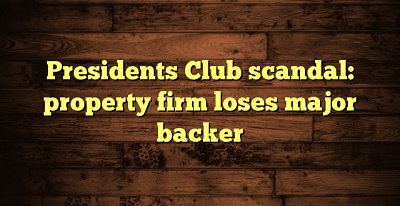 The property company run by a former co-chair of the Presidents Club has lost a major financial backer in the wake of the sexual harassment scandal at an all-male charity dinner.

Ivanhoé Cambridge, a Canadian investment group, said it had halted further investments with Residential Land, which is owned by Bruce Ritchie.

The property magnate was a trustee and one of two joint chairmen of the Presidents Club until it was disbanded last week, following the Financial Times’s revelations about a men-only fundraising dinner at the Dorchester hotel where hired hostesses were allegedly groped and sexually harassed.

Ivanhoé said in a statement: “We are deeply troubled by the events and behaviours as reported by the media; they are clearly unacceptable and contrary to our core values as a global institutional investor. Under the circumstances, we have stopped future investments with the company. We will not make any further comments at this time.”

Residential Land, founded by Ritchie in 1991, is one of the biggest private landlords in central London, and owns more than 1,200 homes along with hotels and Mayfair office buildings. Ivanhoé, a property firm founded in Quebec in 1953 and owned by the Canadian pension fund La Caisse de dépôt et placement du Québec, was one of Ritchie’s main backers. Its decision to sever ties with Residential Land was first reported by the trade magazine Property Week.