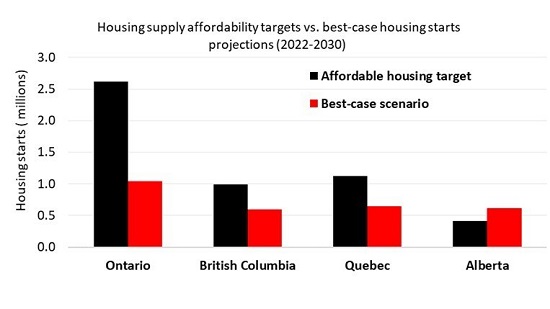 Canada Mortgage and Housing Corporation (CMHC) has released Canada’s Housing Supply Shortages: Estimating what is needed to solve Canada’s housing affordability crisis by 2030 (ESG 2030), which took initial steps to estimate how much additional housing supply is required to restore housing affordability by 2030.

An important challenge to reaching those objectives by 2030 is the amount of skilled labour required. Using the housing supply targets outlined in ESG 2030, CMHC has released the follow-up report Labour Capacity Constraints and Supply Across Large Provinces in Canada, which examines the skilled labour capacity in Ontario, Quebec, BC and Alberta, to deliver on this level of needed housing supply.

The report looks at a best-case scenario, which projects housing starts with ‘maximum’ labour capacity and compares these projections to the affordability supply targets set out in ESG 2030 and CMHC baseline starts forecasts. The best-case scenario is based on the highest percentage of people in our population who work in residential construction and the lowest number of residential construction workers per housing unit under construction in the past 25 years.

The report finds that under best-case scenarios, housing starts will fall well below the 2030 affordable supply targets in Ontario, BC and Quebec, while Alberta will be able to achieve its affordable housing supply target by 2030.

This report further reinforces that to solve the issue of housing affordability in Canada, we need an ‘all-hands-on-deck’ approach to increasing the supply of housing to meet demand. This will include building on innovative ideas and initiatives being utilized in the current housing industry and through the federal government’s National Housing Strategy, as outlined in the Proposed Solutions section below.