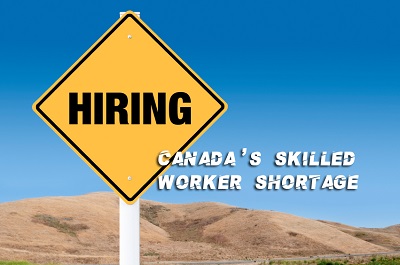 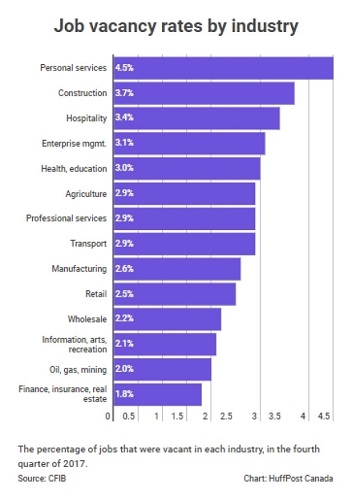 As reported in The Huffington Post, nearly one in 25 jobs in British Columbia is sitting unfilled, a striking sign of the growing labour shortage facing Canada as the economy heats up.

New data from the Canadian Federation of Independent Business (CFIB) shows that the country doesn’t have enough workers for all the jobs available.

Leading the pack is British Columbia, where 3.9 per cent of all jobs sat vacant in the latest report, up from 3.6 per cent three months earlier. Quebec’s vacancy rate has also jumped to 3.4 per cent from 3.1 per cent.

The growing labour shortage comes at a time when Canada’s job market is putting in an historically strong performance.

The 5.8 per cent unemployment rate recorded in February ties for the lowest nationwide rate seen in Canada at least since 1976, a sign that the country’s economy has been firing on all cylinders lately.

Nonetheless, there are still more than 1.1 million people on the unemployment rolls in Canada. Some of that is structural — some percentage of people will always be between jobs — but some of it points to a continuing mismatch between Canada’s available labour force and the jobs being created in the country today.

Ted Mallett, vice president and chief economist at CFIB, says more retraining of workers in industries that are “in transition” would help mitigate the problem, by shifting workers from declining industries to growing ones.
Keep reading in The Huffington Post