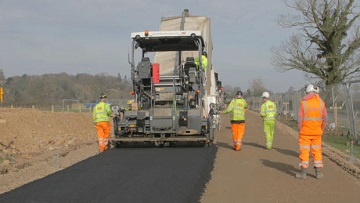 Can plastic pavement curb the world’s epidemic of plastic waste?

Ninety percent of the plastic we use ends up in landfills, or in the world’s oceans. Now, a Scottish firm has invented a way to recycle that hard-to-use plastic for a role that requires durability: paving roads and highways.

“It has all the ecological, environmental benefits, but to your ordinary punter, you don’t see any difference at all,” Boyle said.

It used the equivalent of 750,000 plastic bags and bottles ground up along with other hard-to-recycle plastic. The plastic flakes are mixed at a plant in Scotland with what MacRebur co-founder Toby McCartney calls a secret ingredient. It’s then bagged up and shipped to asphalt manufacturers.

That blend replaces some of the black, oil-based bitumen that keeps regular roads together.

“For every ton of bitumen we replace, we save a ton of carbon emissions,” said McCartney, “so for the environment, it’s the way forward.”

MacRebur, based in Lockerbie, Scotland, is now paving plastic roads across the world — from highways in England to a street in San Diego, where the firm is also opening a new factory.

CBS News correspondent Roxana Saberi asked, “So, is this a long-term solution to the world’s plastic problem?”

“I believe so!” McCartney replied. “It’s the stuff that nobody else can use. It’s destined for landfill or for incineration. We can take all of that plastic and we can recycle it in our roads.”

Keep reading and watch the video on CBSNews.com