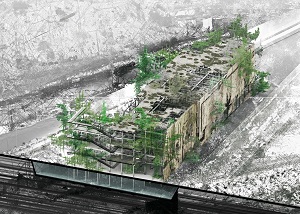 As blogged on Dezeen, students at the Southern California Institute of Architecture have suggested ways to transform a former jail in Los Angeles, including a park controlled by artificial intelligence and building models designed by 3D printers.

The schemes were designed by the first graduates of LA-based SCI-Arc‘s Master of Science in Architectural Technologies – a one-year-long postgraduate degree that launched last year to teach ways to address critical issues in architecture with cutting-edge technology.

Created in the third and final studio – titled Distortions and Alterations of the Real – the schemes use robotic automation and artificial intelligence to develop a way to adapt the city’s Lincoln Heights Jail.

The facility closed as a prison in 1965 and has since been used as a theatre, and then a set for horror films and music videos.