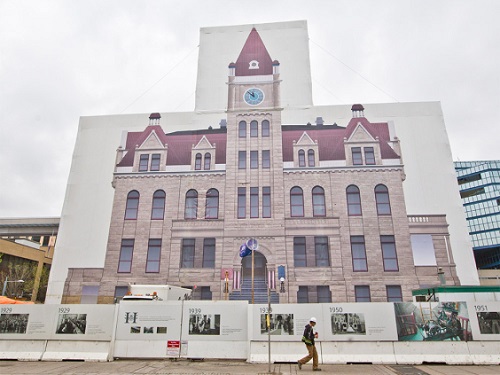 For three years, Calgary’s historic city hall has been just an image printed on a boxy enclosure at the corner of Macleod Trail and 7th Avenue S.E.

But the city says the real thing is finally ready to be unveiled after a restoration job budgeted at $34 million.

The iconic downtown piece of Calgary’s history will be fully unwrapped by the end of June after nearly all of its 15,522 sandstone blocks were individually rehabilitated. In some cases, pieces that deteriorated too much have been completely replaced, and the city says the new blocks were “carefully selected” to make sure they match the original material.

About 2,400 new blocks of sandstone were used, according to the city. Replacements came from Ohio, Poland and Spain, but the Spanish stone is the closest to the sandstone taken from quarries that were open around Calgary when city hall was built at the turn of the 20th century.

The city also worked to stabilize the clock tower after discovering it was leaning away from the building.

Protective scaffolding first went up around historic city hall in 2014 after chunks of sandstone fell off the exterior, which is more than a century old. A pre-design report later found that in addition to the crumbling sandstone facade, the building was also suffering from leaky windows and poor drainage — some of the exterior masonry was described as being in “critical” condition.

City council later approved a $35-million City-Owned Heritage Building Preservation Fund, virtually all of which was allocated to the Old City Hall project.