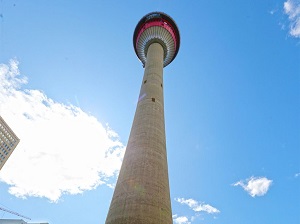 The Calgary Herald reports that on July 14, an elevator cable inside the 191-metre-tall landmark snapped, forcing the rescue of passengers suspended 12 storeys above street level.

No one was injured.

On Tuesday, its operators announced the reopening of both the observation deck and Sky360 Restaurant.

“We look forward to welcoming our many local and international visitors, and remain committed to providing a safe and enjoyable experience,” tower general manager Katie Urness said in a statement.

Elevator service contractor ThyssenKrupp Elevator Canada said they ensured the system was meticulously assessed and retooled before being put back into use.

“Following the incident over the summer, we conducted a thorough and comprehensive inspection of the elevator system,” said company CEO Blaine Coupal.

“Safety is and always will be of utmost importance and we have taken every precaution to ensure the elevators are in full operating condition.”

The tower’s elevators had failed in mid-June, nearly a month before the July malfunction closed the attraction.

In the June 18 incident, a group of seniors in frail health descended the tower by stairway.

One of the seniors, a visitor from Germany, said if that malfunction had been addressed then, the July rescue by city firefighters might not have been necessary.

Owners and operators of the tower, Aspen Properties, wouldn’t comment for this story.