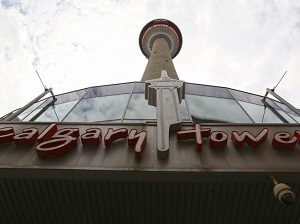 As reported in the Calgary Herald, Jasmine Wittal and her grandparents had just paid their bill after dinner at Sky 360, the Calgary Tower’s revolving restaurant, and were heading toward the exit when they were told the elevators weren’t working.

It was June 18, nearly a month before the July 12 elevator malfunction at the tower in which two of the six support cables snapped, trapping eight people in a car for hours.

Wittal, her grandparents, Sophie and Guenther Haegele, and Sophie’s sister, Elke Bruhm, who was visiting from Germany, did not anticipate they would be stuck atop the 191-metre tower when they ascended via elevator hours before.

One of the tower’s two elevators was already out of order before they made their way up to the restaurant. By the time they’d finished their meals, the second one had stopped working as well.

“They said they didn’t know if it would be fixed in 20 minutes, two hours or overnight, so they suggested we sit down and they’d let us know,” Sophie, 83, said. “We sat for about an hour and a half and were told different stories, but they said the fire department had been called . . . to assist us down the stairs.”

After another half an hour had passed, Wittal decided to make the descent down 802 stairs to investigate, having not seen any fire trucks or emergency vehicles parked on 9th Avenue below.

“The manager told us before I left that the fireman was halfway up the stairs but by the time I got down, no one was there . . . the fire department hadn’t even been called,” she said.

Fire battalion chief Bruce Barrs confirmed there was a call from the Calgary Tower at 8:25 p.m. on June 18 reporting concerns from the restaurant manager that the elevators weren’t working.