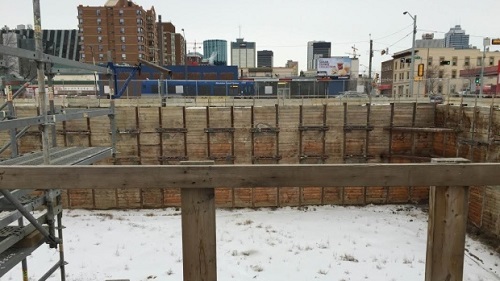 A gaping hole in the ground at the corner of 95th Street and Jasper Avenue in downtown Edmonton has been sold.

Calgary-based Cidex Group has purchased the property, Bartosz Jarocki, supervisor of property sales with the City of Edmonton, said Tuesday.

Two marquee residential towers had been planned for the site but the developer pulled out after failing to meet conditions before a deadline in 2015.

In early 2016, the city put two side-by-side properties on that corner on the market at a combined price tag of $4.4 million.

The buyer had the option of purchasing only one of the two properties, Jarocki said.

​Only the fenced property with the hole in the ground has been sold, he said. Soil remediation has been completed to remove hydrocarbons and other volatile compounds.

The sale price isn’t being disclosed because the land title transfer has not taken place, he said.

Cidex isn’t ready to share what it has planned for the site, as it is still finalizing building permits, Itani said.