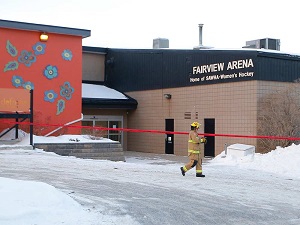 One day after structural concerns were raised about a city arena, the roof came crashing down Tuesday afternoon.

Nobody was injured by the roof collapse at Fairview Arena, according to EMS, which responded to the scene along with the Calgary Fire Department and Calgary police.

The roof collapsed shortly after 4:30 p.m. according to a police spokesperson.

The arena had been closed since Monday due to “structural issues,” according to Leslie Ann Kalman, a director for the Fairview Women’s Hockey Arena Society and the Southern Alberta Women’s Hockey Association, which maintains operations of the facility.

“I understand that there was a snapping sound heard (Monday) and a crack was observed in a roof truss,” said Coun. Gian-Carlo Carra, whose ward is home to the facility.

“The City of Calgary responded immediately to that call, assessments were made and it was understood that we’ve got a problem. At noon (Tuesday), there was a plan to go in and fix the trussing system and now we’re hearing that the roof actually collapsed before we could shore it up. The shoring did not take place in time to prevent the roof from collapsing.”

Kalman said the arena had been evacuated since Monday and nobody was inside when the roof collapsed.

“We erred on the side of caution (Monday) when we saw some structural issues,” Kalman said. “The city has been working with us for the past 30 hours to figure out what to do, and it collapsed.”

The city’s building services department deemed the building unsafe after surveying it Monday along with engineers and representatives from the Calgary Fire Department, according to CFD spokeswoman Carol Henke.

Henke said it was still unsafe for fire crews to enter the building as of Tuesday evening, as they instead continued surveying it from above.