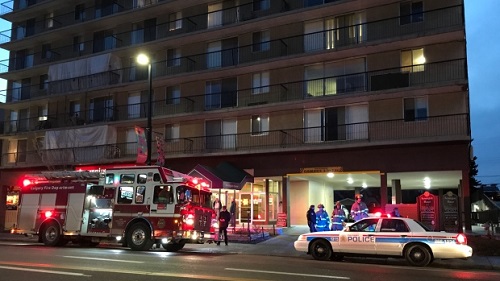 Residents of an apartment block in Calgary’s Kensington area came home to a sign on the door that said “do not occupy” and officials telling them they had 15 minutes to pack some belongings and evacuate the building Thursday afternoon.

Emergency crews were called to the seven-storey Kensington Manor in the 300 block of 10th Street N.W. for a call of a “possible imminent building collapse,” a fire spokesperson said.

The building had previously-known structural issues that had to do with its balconies.

Wayne Brown, with the city’s Coordinated Safety Response Team, said the owner hired a professional engineer to investigate, who found additional structural issues with the building.

The decision was made to evacuate the building around 2 p.m., Brown said.

Members from Calgary fire, police and the Calgary Emergency Management Agency were on hand to assist in the building’s evacuation.

A spokesperson for the fire department said the initial call was for a “possible imminent building collapse,” however the city said while the building is not safe to live in, it has not been condemned.

“I don’t think it’s an emergency as in, I don’t think we have imminent danger of failure. But it’s in bad shape,” Brown said. “Without being properly shored and repaired, there could be some issues.”

After being told of the evacuations, residents were allowed into the building for 15 minutes — just long enough to pack a suitcase.