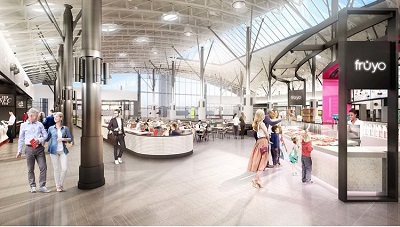 Calgary, AB (January 8, 2018) Cadillac Fairview (CF) is pleased to announce a $17M investment to revitalize the food court at CF Chinook Centre. This exciting redevelopment will elevate the shopping experience for Calgary consumers by modernizing the centre’s existing food court, transforming the space into a CF Dining Hall.

“Dining is an essential aspect of the overall shopping centre experience and we are delighted to evolve the centre’s food court into a signature CF Dining Hall where guests can enjoy culinary delights in a premium environment,” said Josh Thomson, Vice President, Development, Cadillac Fairview. “Not only does this redevelopment reaffirm our dedication to providing a premium shopping experience for Calgarians, but it also reinforces our long-term commitment to the City of Calgary.”

This investment marks the latest major upgrade to the centre’s food court since the last completed revitalization in 2000. The project will see the entire existing food court renovated, improving the aesthetics, design and capacity of the space. The renovation will include expanding and modernizing units, enhancing décor elements like tiling, upgrading furniture with communal tables and banquets, and the implementation of sorting stations to improve the overall experience for guests. The project will also include enhanced features including a revamp of the centre’s existing outdoor patio. The 30,000 square feet of redeveloped space will feature 835 seats and 20 dining options.

This redevelopment builds on several exciting projects at the property including the newly opened 61 Avenue S.W. pedestrian bridge over Macleod Trail that connects to CF Chinook Centre. The centre’s revamped dining space will have direct access to the new pedestrian bridge, providing a welcoming arrival experience for incoming guests. The centre is also preparing for the arrival of the first Saks Fifth Avenue in Calgary in early 2018. The opening will mark the third Saks Fifth Avenue store in Canada (the first in Western Canada) and is scheduled to open in February.

“We’re proud that CF Chinook Centre’s dining space is consistently one of Canada’s busiest and most productive food courts year after year,” commented Paige O’Neill, General Manager, CF Chinook Centre. “We look forward to transforming the food court into a CF Dining Hall which will be open and inviting, with more communal spaces that better reflect the tastes of our shoppers and community.”

In addition to the centre’s food court revitalization, Cadillac Fairview is pleased to announce an additional $4.5M investment to the south portion of the centre in 2018. This investment will focus on enhancing centre including new tiling and railings.

Cadillac Fairview is one of the largest owners, operators and developers of best-in-class office, retail and mixed-use properties in North America. The Cadillac Fairview portfolio is owned by the Ontario Teachers’ Pension Plan, a diversified global investor which administers the pensions of more than 300,000 active and retired school teachers. The real estate portfolio also includes investments in retail, mixed-use and industrial real estate in Brazil, Colombia and Mexico.