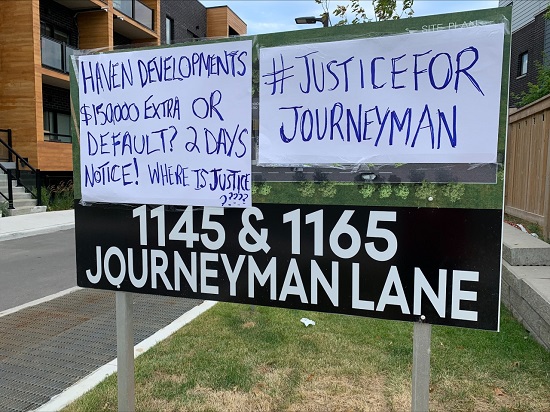 Several people who bought pre-construction townhomes nearly three years ago in Mississauga were forced to come up with between $70,000 and $170,000 in less than a week before they were able to close on their properties.

New owners at 1165 Journeyman Lane, also known as the Clarkson, were told by the property developer, Haven Developments, on Saturday that costs far exceeded what purchasers expected would be required in order to close on their purchases.

Documents sent to the buyers from the developers show everything from electrical meters to the water and sanitary costs in the tens of thousands of dollars.

“Me and my fiancé put our life savings into this house, and the builder told us that our closing costs are going to be almost 20 per cent just to cover water and electric meters.”

Paluch tells CityNews they had to scramble to get loans from friends and family in order to cover the costs and keep their home. “Lawyers have told us that in their entire career, they haven’t seen costs this outrageous for closing.”

“We deal with the contracts in good faith, and to be hit with the fees that we’re getting 48 hours before closing … we feel it’s excessive,” said another buyer Chris. “I had to pay $125,000, had to come up with that money a day before closing and drop off a check.”