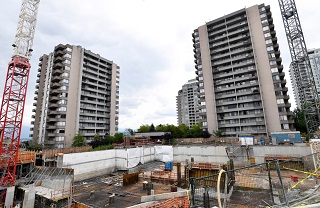 As reported on BurnabyNow.com, Dale Arnold stays at the office as late as possible every night to avoid going home to a noisy construction zone.

He says he has been subjected to thunderous noise and thick dust clouds in his Metrotown apartment since the construction of two towers began “ridiculously close” to his building in 2017.

He has rented an apartment in one of two Parkview Towers on Hazel Street for nearly 10 years.

Burnaby council approved a proposal in 2016 to add two highrises – a 31-storey, 238-unit rental tower and a 41-storey, 321-unit condo tower – and a new church to the lot between Hazel, McMurray Avenue and Sussex Avenue.

Arnold said the rental building is being built mere metres from his window and is causing him the most grief.

He said Parkview residents were largely unaware of the details of the rezoning application at the time – and had no idea how the coming construction would affect them.

“We have lives; we’re working people,” he said. “You have no idea the enormity of it.”

Since construction began, the noise and dust have been near-constant, access to the parking lot has been restricted and residents have lost access to their prized outdoor green areas, he says. The elevator in the building has also regularly gone out of service as a result of construction crews drawing large amounts of electricity from the existing buildings’ supply, Arnold believes.

“They’re cannibalizing our building,” he said.