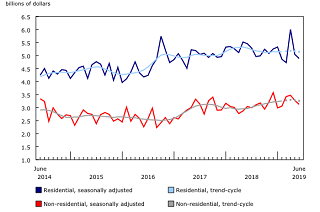 Statistics Canada reports that the value of building permits issued by Canadian municipalities declined 3.7% to $8.0 billion in June, largely due to a decrease in the value of multi-family and institutional permits. Six provinces declined, with Alberta accounting for over one-third of the national decrease. Of the provinces posting gains, Nova Scotia reported the largest increase (+32.1%), reflecting gains in the value of residential and commercial permits in Halifax.

The value of permits for multi-family dwellings posted the largest monthly decrease of the five main components, down 6.7% in June to $2.6 billion. The decline was concentrated in Quebec, where the value of permits fell 21.8% following a 16.9% gain in May.

There were increases in other parts of the country, including the census metropolitan areas (CMAs) of Kitchener–Cambridge–Waterloo (+$82 million) and Kelowna (+$61 million).

Declines in institutional and commercial permits

On a month-to-month basis, the value of commercial permits decreased 1.1% to $1.9 billion, largely due to declines in British Columbia and Alberta. However, there was a notable increase in Quebec (+$156 million), driven by a permit for Medicago, a biotech company in the CMA of Québec.

Municipalities issued $25.8 billion of permits in the second quarter, up 5.8% from the previous quarter and up 4.1% compared with the same quarter in 2018. On a year-over-year basis, a 1.0% decline in the value of permits in the residential sector was offset by increased construction intentions in all three components of the non-residential sector.

The value of permits was up in seven provinces in the second quarter over the first quarter, led by British Columbia (+22.0% to $5.6 billion). The increase in British Columbia was attributable to a significant rise in permit applications in April in the residential sector of Metro Vancouver prior to the introduction of higher development charges in May.